As the preparations for B:READ’s Mabohai Bookswap were in full swing last month, I found myself using managing tasks using not one, not two, but three to-do apps in that same period. I admit that I enjoy keeping lists, and they help me keep track of things in my head; but at one point, it did occur to me: “Why am I using three different apps to handle my tasks? This is kind of ridiculous.”

So I took a closer look at the apps, and as it turns out, there wasn’t a problem of redundancy – the tasks recorded in each app were mostly different. Each app served a different purpose, depending on what tasks I wanted to achieve.

I am terrible at keeping to any weekly goals – yes, I find my day job a challenge, thanks for asking – but I keep trying!

Workflowy is a web app and an iOS app. Its specialty is that you can have tasks at different levels, which I can break down or move up as I wish.

For example, here I have a list of things I meant to do within a week: 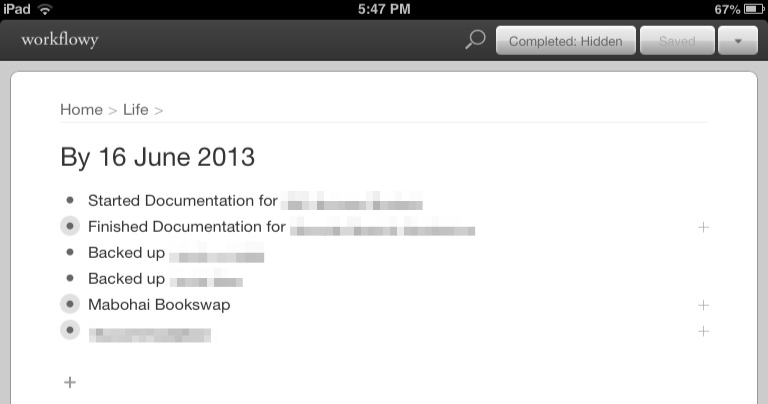 If you have ever found it difficult working towards such high-level tasks, you may understand that vaguely defined list items like “Documentation” just aren’t helpful when you’re panicking or procrastinating, because they seem like such big tasks.

If, however, you keep in mind that a task is made up of smaller tasks, or sub-tasks, then you can break down your high-level tasks into smaller, manageable chunks of work. You can then focus on completing these sub-tasks. 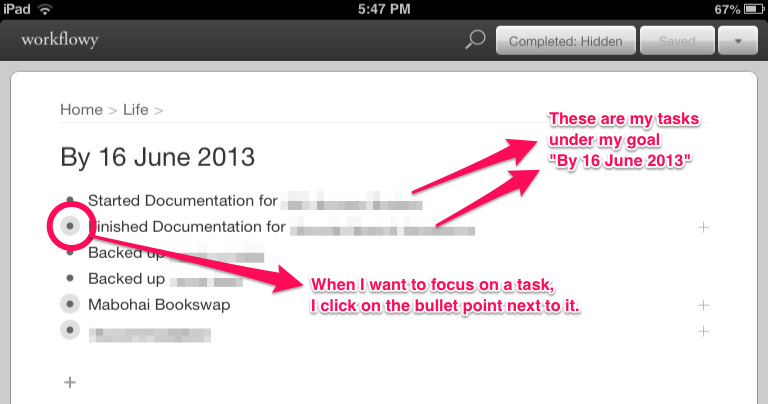 The app allows me to ‘focus’ on a task by clicking on its bullet point.

So, in the following screenshot, I am now focused on the task “Finished documentation”. It actually refers to documentation for a project. I then broke this task down into the sections for documentation, so that I can tick them off as I finish them, one at a time. The whole task feels much more doable.

Also notice that the app also lets me focus on it without the noise of the other, more high-level tasks.

Sometimes, though, I can get too focused on a sub-tasks. I might get frustrated with one and take too long on it.

When this happens, I am able to move back out of the current sub-task and see how it contributes to the larger task or goal. This lets me make a decision on how important the sub-task is to the overall goal, and how much more time to spend on it.

Despite the usefulness of having weekly goals, they are easy to neglect when you are ‘fire fighting‘. I have – many, many times – found myself struggling to just get through as many tasks as possible, often taking days to do so, regardless of whether they contribute to any larger goals.

Fire fighting is a sign of poor management or planning, and it’s best to avoid getting into such situations in the first place (easier said than done!). But there will be days when you just gotta do all the things before the end of the day.

One afternoon, I had a bunch of things to do before 5.00 pm, and was worried that I didn’t actually have time to do them. They were all sub-tasks, and required me to do a bit of driving as well.

I chose the most important tasks in my list and put them into the iOS app 30/30. The app can be buggy at times, but it is useful for one particular thing: You can set time periods for your tasks. 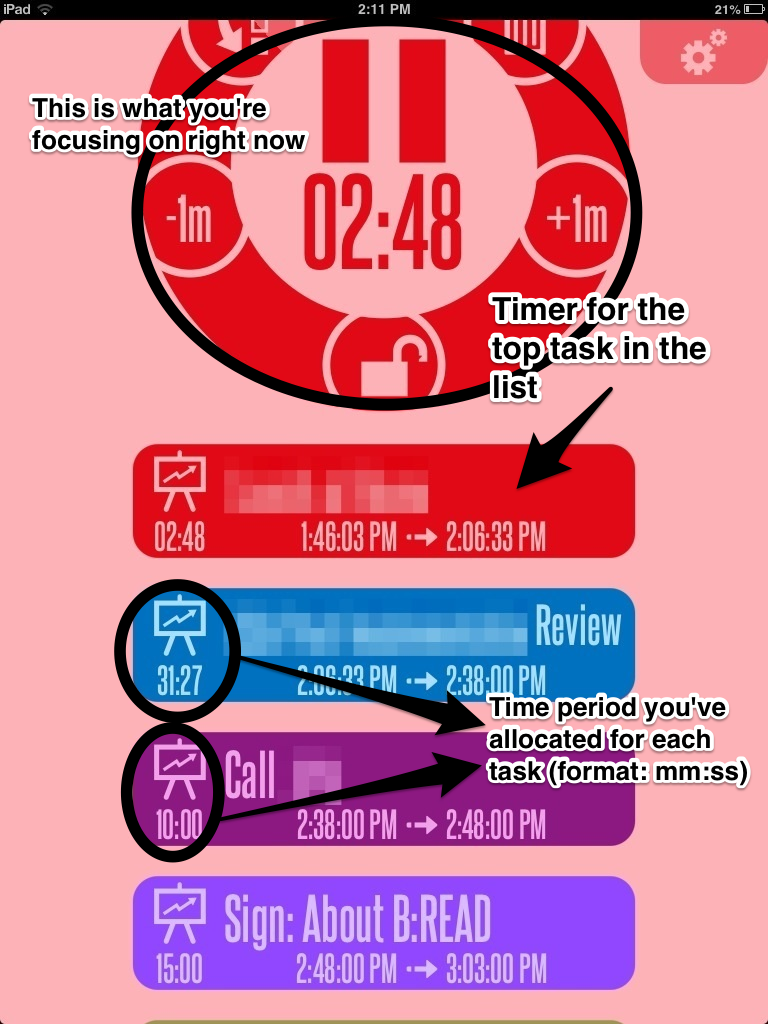 For each task that you decide to focus on, you get a timer that you can start and stop. You can reorder the tasks as time passes, and add or remove minutes as you require. It also gives notifications when the allocated time for a task has run out.

I chose the most important or urgent tasks in my list, and estimated time for each of them. I even threw in some buffer time such as “10 minutes – downtime” and “30 minutes – driving”. To my relief, the app showed that I could get my tasks done before 5.00pm.

In the end, I cut out another task and extended the time for another. You don’t always need to follow a plan to the millisecond – I just needed to know that I had enough time to do my tasks.

By the way, lest you think I’m a major control freak (I am), I don’t use this to manage my tasks on a daily basis. There are days when you want to spend a good few hours on one thing, or when you don’t really care which tasks you finish that day.

With the weekly goals and the more ‘control freak’ hour-to-hour tasks, maybe I would finally finish that damn documentation.

Still, I found that I would sometimes get distracted by ‘tiny’ tasks, which are even smaller than the sub-tasks I earlier identified. These tend to be low-effort tasks that take you 5 minutes, like sending a file to someone, and also tasks that you might forget, like that request from your colleague as you were running off for lunch break.

What worked for me was to dump them in a simple to-do app, like the iPhone app Carrot. Have you met Carrot?

I’m sorry that this may be the only post I ever write about Carrot, because she is known for her tough love – or complete lack of love, if you never do your tasks – and I think her ‘upgrade’ mechanism is brilliant. But anyway, these tiny tasks can be recorded in any featureless to-do app. I chose Carrot for the clean interface and reminders (available if you levelled up enough). 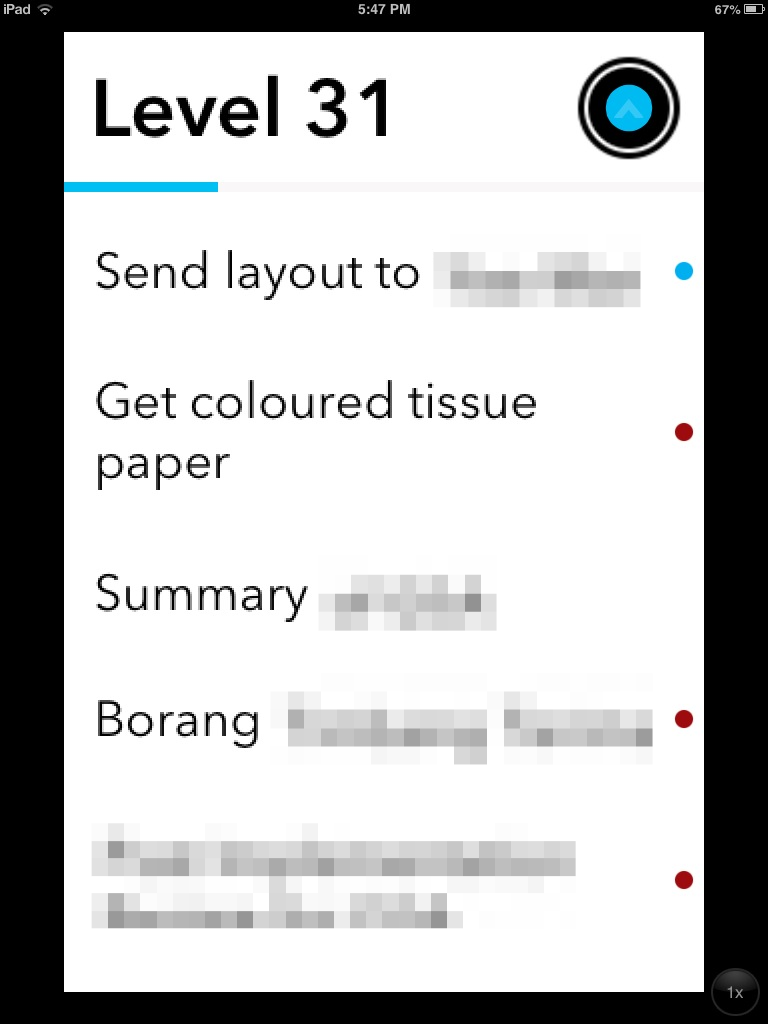 As you can see, I keep in here the tasks like “send layout” or “get coloured tissue paper” – tasks that are not major enough to contribute to my weekly goals, nor take much time. Its akin to scribbling things down onto a post-it note because you can’t deal with a task right away.

Is it useful to keep track of tiny tasks at all? Some may argue that doing them is faster than recording them. I do this because I actually want to focus on bigger tasks, and tiny tasks can be a interruption to that focus, or lead to other distractions.

I do think that time management apps are more useful if you already have your own methods of dealing with tasks. My ‘lessons’ for each app show a mishmesh of different techniques, like focusing or prioritizing. I don’t pretend to be great at time management, by the way!

Interested in finding out more? Since this isn’t really a post about productivity, I’ll just share a few more links and let you go do your own research. 😛

Of course, what works for each of us is different! 🙂