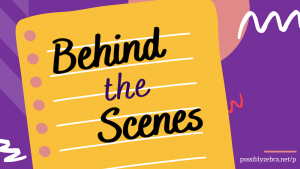 Five years ago, I was part of a local women’s tech seminar and, on stage, had a cringey experience (read: I embarrassed myself). There is a blog post for this that I’ve never managed to finished, haha.

When I signed up for another women’s tech event this year, I wasn’t really thinking of that previous incident. Because I’m optimistic sometimes.

In February this year, I signed up to present a talk, and to conduct a workshop, at an International Women’s Day 2020 (IWD2020) event, organised by Women Techmakers Brunei (WTM Brunei) and GDG Brunei. 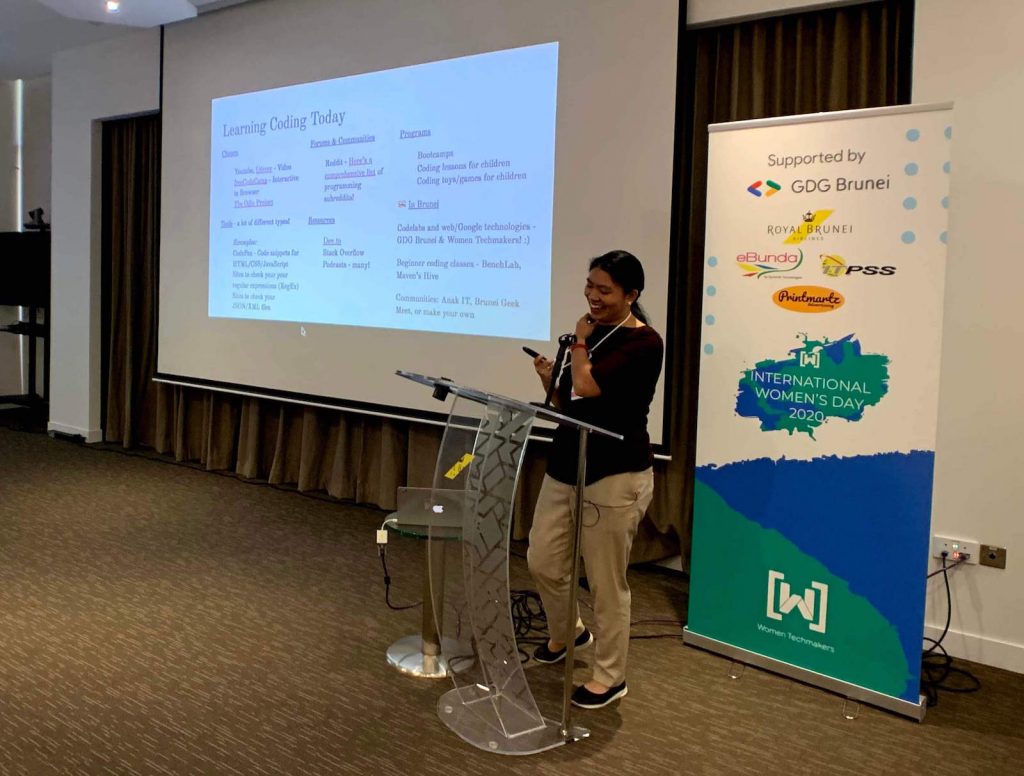 Here’s the graphics for the talk, the workshop and the event itself: 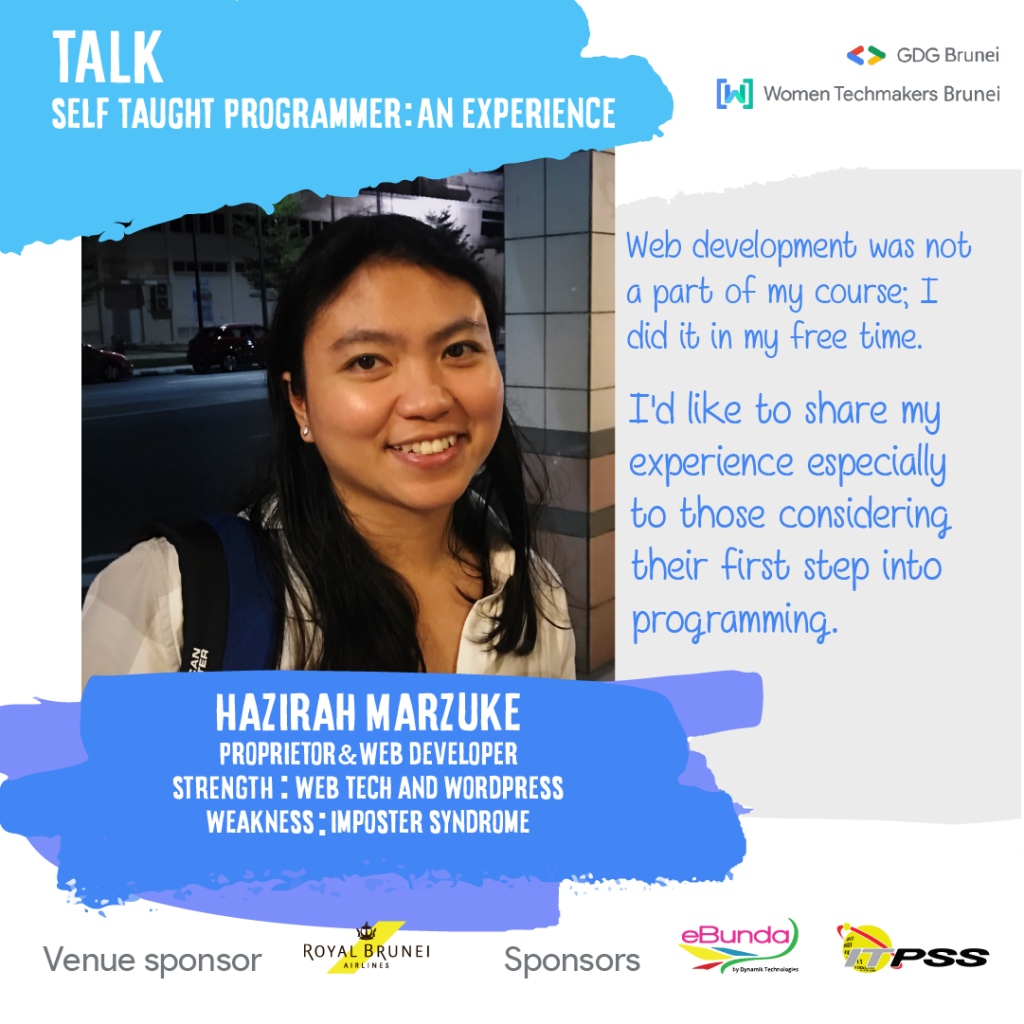 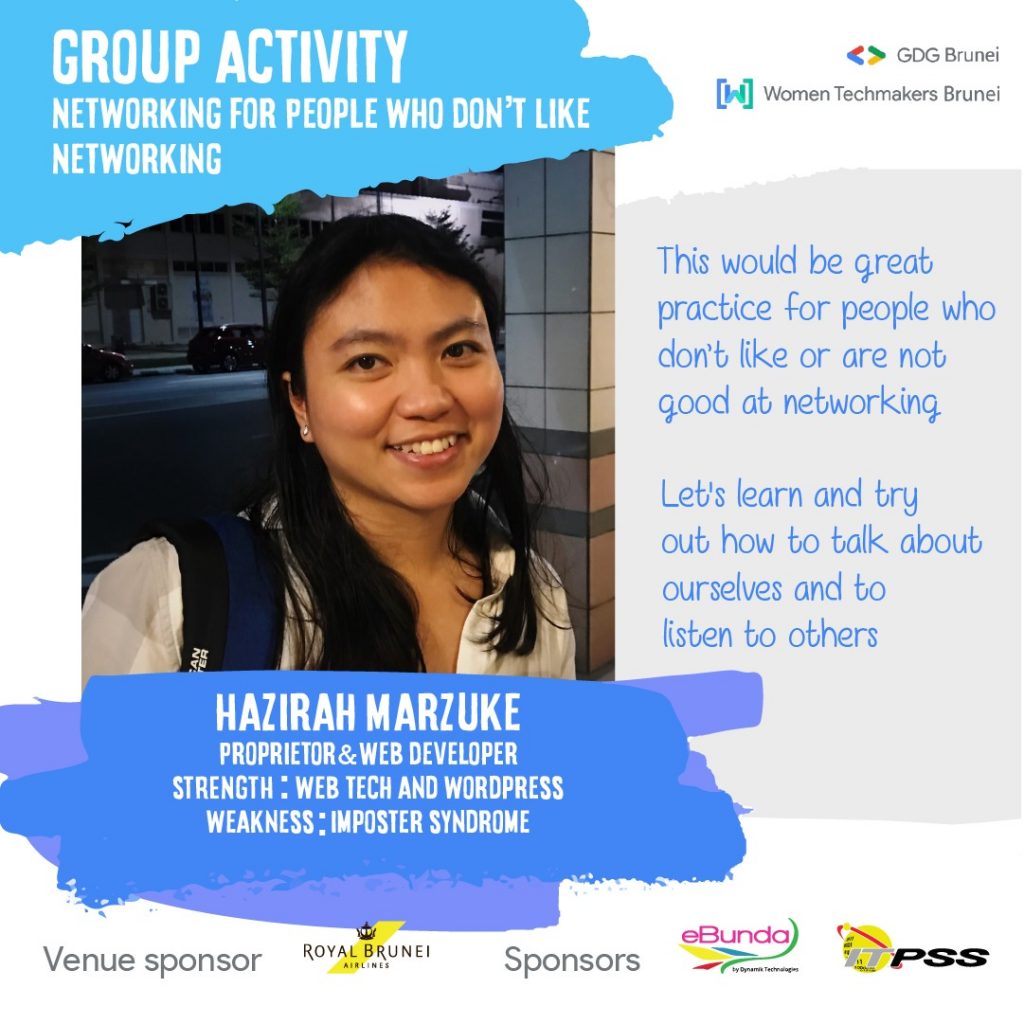 Group Activity: Networking For People Who Don’t Like Networking

So how did my activities go? Spoiler alert: The cringe was back.

In reflection, and after talking to others,  ‘cringe’ is inevitable  for some of us when we recall our past work. And I cringe when I remember my talk. But I’m glad to say that it was offset by a pretty great experience with the networking activity. *

This is part one! This post will cover my decision (or lack of) on the topics, and some thoughts on my talk “Self-Taught Programmer: An Experience”.

* My networking activity will be covered in a separate post, part two.

If you detected my usual bit of imposter syndrome, kindly highlighted in the posters above by my friends at WTM Brunei:

…Then you’re right! Why was I not speaking on a more technical topic?

I was in pains to think of  a topic that hit the spots I wanted : audience demand, my own familiarity, my own hope to successfully appear as an expert in said topic, and of course, something that I would enjoy preparing for.

Some ideas I considered:

* I’ve had conversations with others about this – the best suggestion I’ve heard was to teach an intro-level course on WordPress. We’ll see if I ever take that up!
** Unluckily, I took too long to decide and someone else took up the topic at IWD2020.

Seeing the IWD2020 programme fill up with more technical talks and workshops, I felt the insecurities creep back – am I skilled enough to do a technical talk? In the end, as there was a gap in “soft skills” or experience-based topics, I switched gears.

I had never really talked publicly, even on Twitter, about  how I got into tech and became a web developer . To celebrate IWD2020, I figured I could represent myself as a women techie and talk about this for the first time.

I wanted to share what it was like for me, making websites in the late 90s. I also hoped that, in some small way, being a woman sharing her “journey” as a programmer, it could be a little push for other women who wanted to start out too. 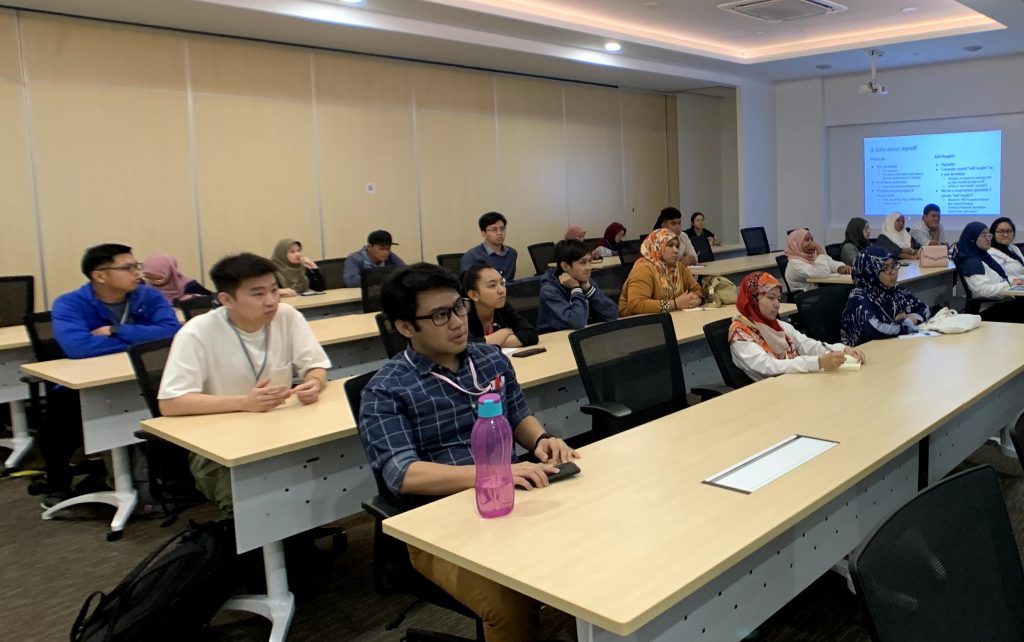 So, I’ll get straight into it. There are two reasons I cringe when I remember this talk:

I had actually been feeling relaxed before the presentation, chatting with a few people I knew, the room still somewhat empty as most attendees were still making their way there. But I got complacent. As the room started to fill up, I checked on the last bits of my presentation prep a little too late – my slide notes weren’t showing up properly on my laptop, my mic position was off. And all through this, my reddening face.

The bad start itself was probably not that cringey – probably, I rationalise to myself – it was only a few minutes, after all. But it  shook my confidence  for the rest of the presentation.

I felt like I connected less to the audience, making less eye contact. I was going through what I had rehearsed automatically, without seeing how the audience was reacting to me. It only made me feel more doubts about my topic.

A lot of thanks to Mahyuddin and Syuaib for helping me out with the presentation prep! I take responsibility for the quirks I mentioned 🙁

On representing as “self-taught”

Perhaps more importantly than those 5 minutes, there was this other nagging doubt I had from the beginning. It was my talk title. 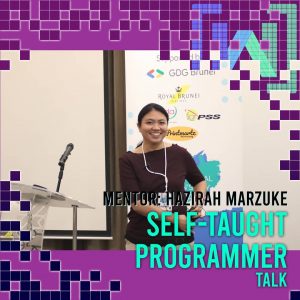 I didn’t intend to encourage being “self-taught” over other types of learning. I know what works for me; but for other people in general, I don’t have a firm stance on it.

Also, I worried about misrepresenting myself, as I am not completely self-taught. “Self-taught” implies a lack of access to “proper” instruction. I’m privileged enough that I wanted, and was able to do, a CompSci degree.

I tried to  address these contradictions in my slides , and emphasise that the talk was about my experience.

Firstly, I disclosed at the beginning of the talk that I wasn’t purely self-taught. I have a CompSci degree, after all. (Although I’ll maintain that the course didn’t cover web programming back then!)

I also wanted to demystify self-learning, so that it sounded  attainable and relatable . At the same time, self-learning could realistically take months or years before you feel you are “good” at your subject.

Personally, as described in this slide below (“How did I learn?”), I’d gone through periods of “not learning”. And then, there are moments where I experienced a “spark” – several of these, in fact. It is those moments that drove me beyond those “not learning” periods, to learn new techniques or to improve my understanding. 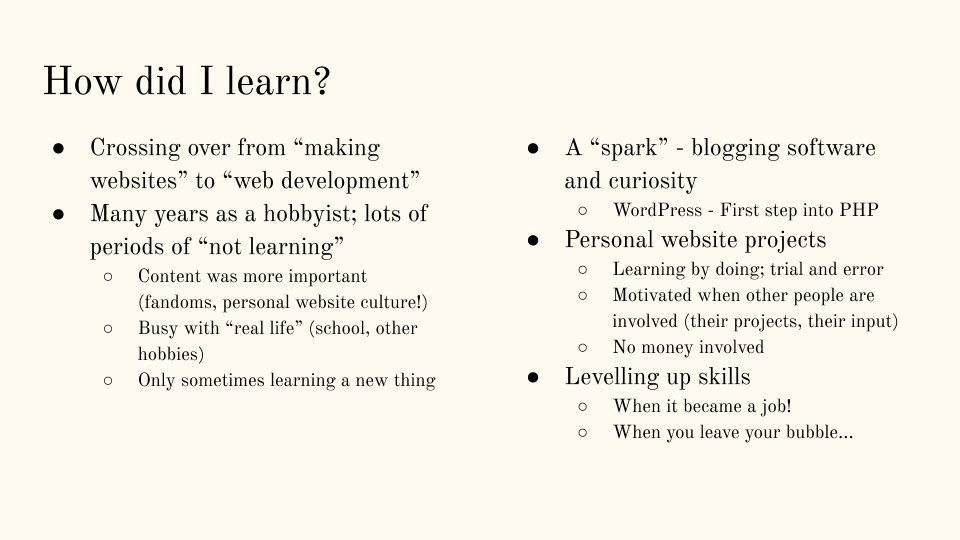 I hoped that breaking down my experience this way would be more insightful,  rather than just giving a timeline  of my “self-learning journey”. A timeline would’ve looked like this:

This is, frankly, boring to read out in a presentation.

Also, being set in the early 2000s,  these names and the contexts around them would likely be lost  to a younger audience, or those who weren’t making websites at the time. I wanted my talk to be more relevant, so I tried not to focus on these details.

But I did let myself indulge, briefly. I was pleased at these two slides that got a few laughs during my talk! These were a throwback to my old websites, as well as HTML learning resources available in the late 90s to early 00s: 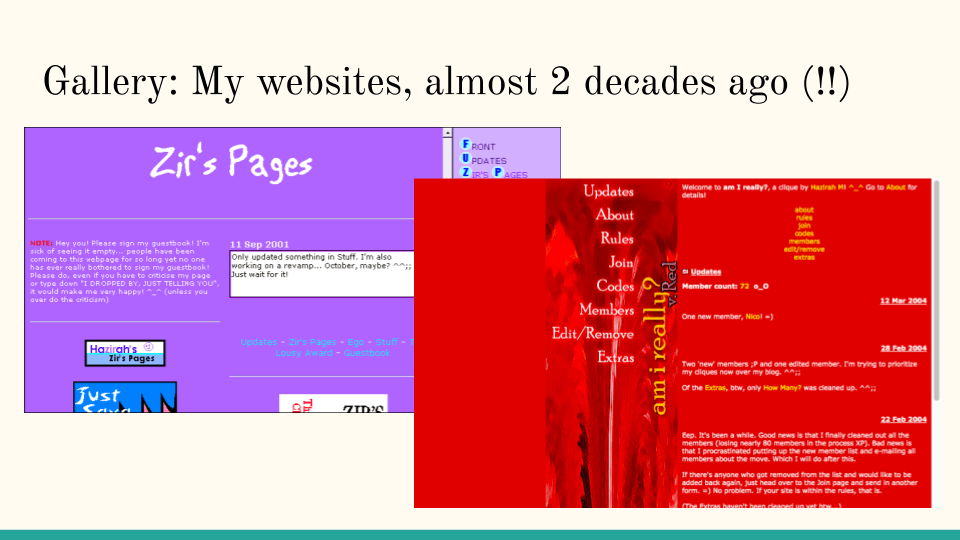 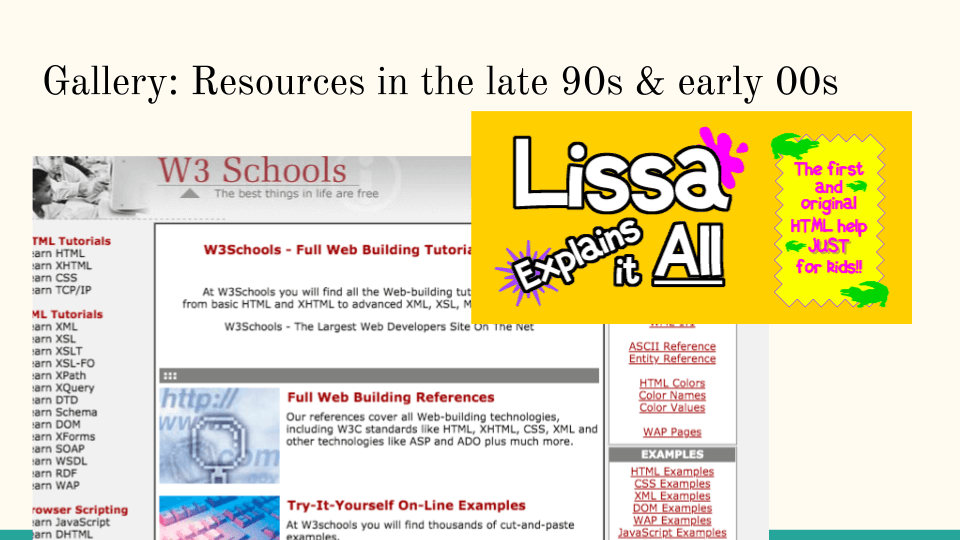 I know, I know – how could I second-guess myself even more? But I did. It was a lingering feeling while preparing my slides, that I only managed to confront afterwards.

Web development as a profession, as well as the demand for developers, have changed so much since my university days.

In 2020, why do people want to get into programming? Particularly if you’re young, or already working but transitioning from other industries. Anecdotally, it might be “cool” to say you’re a programmer – not that it’s reflected in Brunei salaries, cough cough – and it’s attractive to be involved in startups related to tech or apps or web platforms.

Worldwide,  there’s a demand to learn programming , as well as the belief by some that coding is an essential skill (see: Tim Cook in 2018). There’s an abundance of easily available online tutorials and videos; there’s coding bootcamps, no matter your background; there’s initiatives to get kids started early on coding. It’s a very different landscape from when I did my degree.

But with these in mind, there’s also  the uglier side of the tech industry  – defense of hate speech (The Guardian, 2020), questionable coding bootcamps, ongoing diversity problems whether in the workplace (The Verge, 2018) or AI bias (The New York Times, 2019; Reuters, 2018). Also consider the coveted hustle of startup life, or the chase to become “the next Facebook” (or Uber, or Airbnb, and so on) – and how these sometime pushes aside ethical considerations or exploits workers.

And I hadn’t addressed any of that.

Maybe I didn’t need to? Yes, I could focus on why I became a programmer, and how I did it. But perhaps my biggest problem was: why is my “story” even relevant in this current era of programming as a profession? And was it responsible of me, as someone who is conscious about social issues in tech, to speak without addressing these to the beginner programmer in 2020?

If I were to do over this talk, here are some ways I could approach it:

What you can take away

Dear aspiring coders, I still don’t feel confident telling you my story if it isn’t relevant to your learning now. But if you’re still wondering if programming through self-learning is for you, I’ll leave you with my  closing thoughts on self-learning , in this slide: 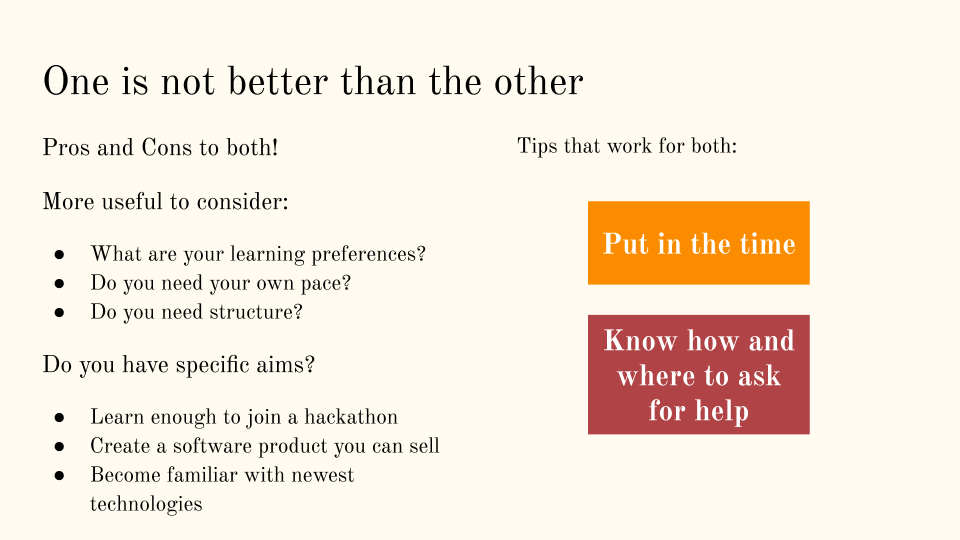 My full slides are here:

For better viewing: Click the “full-screen” button in the menu bar

Or: View in Google Slides

Part II – Networking as defined by me – Coming Soon(?) 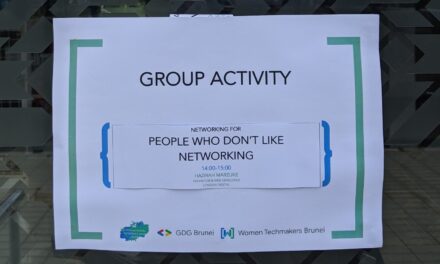